The bull run is on, so its time to buy the dips. The Ichimoku Kinko Hyo system provides excellent support levels for buying on pullbacks at and great discounts. 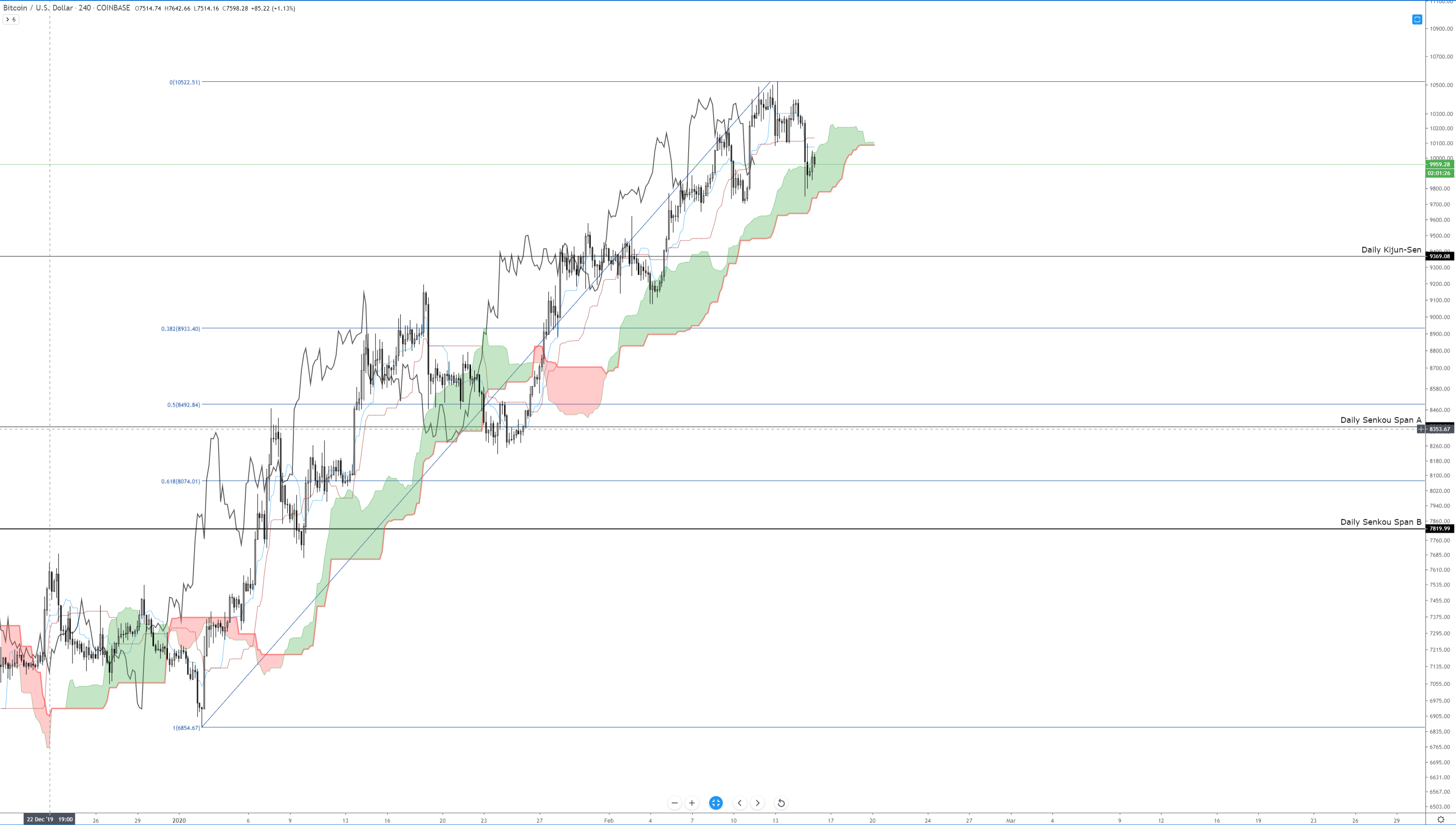 The above chart is Bitcoin’s 4-hour Ichimoku chart. I’ve placed black horizontal lines that identify the daily chart Ichimoku levels. I’ve also included the Fibonacci retracement of the prior swing high of $10,522.51 on February 13th, 2020, to the confirmation higher low made on January 3rd, 2020. The likely hood of particular support levels in the Ichimoku system holding is increased when you compare multiple times frames. The probability of support being substantial is further increased if there is a corresponding Fibonacci level. The initial support level is the 4-hour Senkou Span B near the $9,777 value area. However, the deepest support zone with both a Fibonacci retracement level and an Ichimoku level would be between $8,350 and $8,500. The 50% Fibonacci level is at the $8,500 value area and the daily Senkou Span A is at the $8,350 level. So Ethereum is off like gang-busters. From December 16th, 2019, low of $116.25, it has risen 149.46% to a 7-month high of $290. We’re definitely in the extremely high probability land of ‘pullback imminent.’ Ethereum’s 4-hour Ichimoku chart above is pretty damn healthy. There are clear and consistent drives higher with support found against key Ichimoku levels. The daily chart is straight-up parabolic. We could see a reasonably fast drop on Ethereum’s chart – but the distance could be muted compared to Bitcoin’s. There is a relatively large cluster of support zones within the $250 value area. As we look below the $250 value area, the next support cluster is between the 38.2% Fibonacci retracement at $216.02 and the Daily Kijun-Sen (which is also the Weekly Senkou Span B) at $222.05. The entire range between the lowest and highest level doesn’t even crack $1.00. Given that there is such a massive cluster of Fibonacci and Ichimoku levels against such a powerful psychological level as $50, I would bank on a pullback to be $50 to be a very, very likely scenario.